Triathlon is a complex competitive sport which includes three disciplines: swimming, cycling and running. It’s mostly considered to be the forefront of endurance sports not just because it demands much training time and effort but because the event itself is a grueling endeavor no matter the type of triathlon, whether of the Olympic sort or the Ironman events.

The sport, however, has seen a growing fan base and number of enthusiasts over the years from amateur club members to famous celebrities to elite athletes. Many runners, swimmers and cyclists aspire to or actually participate in a triathlon at least once in their career just to test how far they could go in a sporting event which involves disciplines outside of their expertise.

If you are considering to undergo training to become a triathlete, it’s wise to consider not just the training schedule, gears, time and effort needed but also the things that could go wrong at any point during training and in the event itself. It is most wise to do a reconnaissance first before immersing yourself into something that demands much from you.

Most studies published in sports science journals agree that 80% of injuries incurred by triathletes are due to overuse. Fatigue and exhaustion are also more common impediments rather than trauma caused by crashes in the cycling part, collisions during swimming or falls during training.

It is also reported that former cyclists and swimmers are more susceptible to injuries because they lack the experience and muscle elasticity of those who trained as runners before becoming triathletes.

The transition from cycling to running is critical because it takes time for the body to adjust from the position in cycling to that of running. Here is where experience comes to the advantage of the seasoned triathlete compared to the beginner who might not take this critical transition into consideration. Knee and lower back injuries are more likely happen to the less careful beginner.

Let’s take a look then on the common injuries of triathletes.

This is not a serious injury but it’s still worth mentioning here since blisters are the most common annoyances of triathletes. Many have had them while preparing for the first or next triathlon. Layers of skin undergo shearing due to friction and thus are forced apart. Blood or fluid fills the space which then produces a blister. Don’t belittle blisters because they have been reported to prevent participation in some cases.

It’s important to properly stretch the Achilles and the calf muscles before and after the triathlon event to avoid this injury. Strengthening exercises that target the lower leg stabilizing muscles can also keep you away from Achilles Tendinitis. Be proactive when you start to feel the pain and seek advice of your physician and get an ankle brace for quick recovery.

ITB Syndrome is another injury caused by the running part in a triathlon. The ITB is a thin sheath of fibrous tissue that slides forwards and backwards across a bony point outside of the knee.

Injury occurs due to the excess friction in the ITB which can be caused by a number of factors. Among them are poor running technique, weak core muscles, sudden increase of mileage during training, and others. 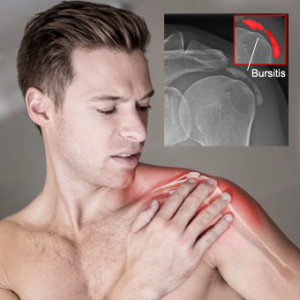 The bursa, a fluid-filled sac, is a friction reducer of tissues in the body and the bursa in a shoulder can be inflamed which is what a Shoulder Bursitis is. Frequent use of the Rotator Cuff during swimming may impinge the bursa between muscles and bones in the shoulder which causes inflammation or bursitis.

Again, not abruptly increasing the volume of training especially if not an experienced swimmer helps one to prevent Shoulder Bursitis from occurring. Exercise the shoulder muscles to increase their flexibility, strength and endurance.

This injury is pain felt either on the front edges or along the inside of the shin. Shin Splints are due to overused or overstrained muscles mainly because of improper movement patterns.

Improper footwear, weak foot arch muscles and quads, abruptly increasing training, and excessive pronation during running are some of the common causes of this injury. Supportive running shoes are a big help in keeping away from shin splints.

Your foot, tibia or hip are the most commonly affected areas that may undergo stress fracture when training for a triathlon. Fatigued muscles that cannot absorb any more shock transfer the stress to the bone which then produces tiny cracks called stress fractures.

Give your muscles time to adapt by steadily and not dramatically increasing your training to avoid stress fracture. It’s also recommended to train on a treadmill 30-40% of your running routine. First of all to control your running training, make running in winter more comfortable and to reduce the stress shocks while running. Read this article with treadmill reviews and keep on running!

An improper bike fit usually causes this in triathletes. Patella tendonitis also occurs due to inflexible or inflamed quadriceps and hamstrings which pull the kneecap against the joint causing pain right in the very center of your knee.

Avoid this by ensuring proper bike fit by going to a professional fitter. Proper stretching and exercise of the hamstrings and quads also ought to do the trick. See advice of a doctor and use a knee brace support to decrease the pain.

This is an injury affecting the shoulders due to the imbalance created between front shoulder and chest muscles from the rest of shoulder muscles due to freestyle swimming. You will feel the pain during swimming or whenever your arm is raised above your shoulder. Shoulder strengthening exercises help prevent rotator cuff tendonitis.

Heel spur causes pain under your heel. It is actually caused by delayed healing of a tear on the connective tissue that runs from your heel to your toes. The body repairs the weak tissue with bone instead and this becomes heel spur. Prevent this injury by ensuring you have proper running shoes and good running form.

The cumulative stresses of training in cycling and running can also induce back muscle pain. Proper training schedule gives time for the body to adjust accordingly preventing accumulation of stress and preparing it for transitions needed in triathlons.

Still up for the challenge of tackling a triathlon? Let these warnings be not for discouragement but for wise planning and training instead.